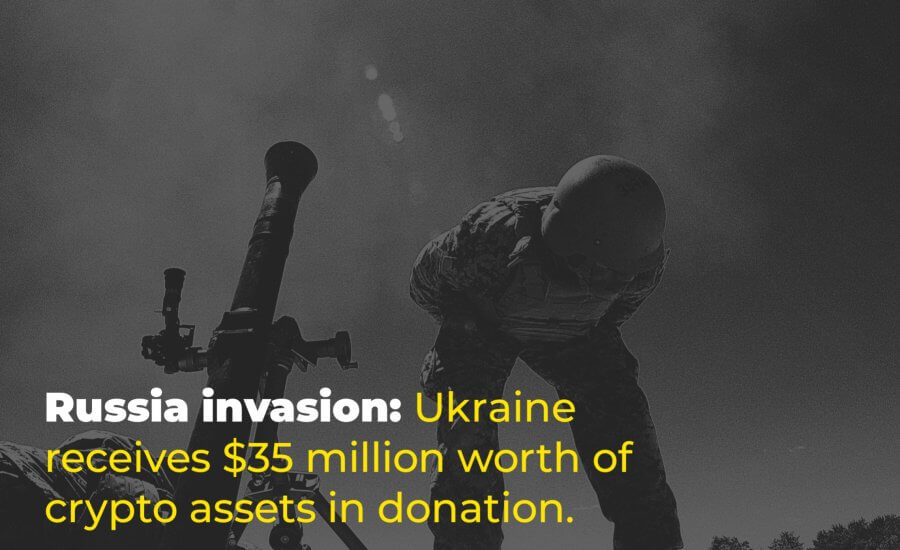 Russia invasion – It has been close to two weeks since Russia began its assault on Ukraine, a war that has so far killed hundreds of people, displacing more than 2 million Ukrainian citizens across Europe.

The conflict traces its roots to Ukraine’s decision to build a closer tie with the European Union and NATO.

In a speech days before the Russia invasion, Russia President Vladmir Putin made clear that he considers Ukraine’s place to be in Russia’s fold, a position it held from the days of Russian empire under Catherine the Great.

Through the nation’s shared history in the Soviet Union. The invasion, which has become one of Europe’s gravest security crisis since World War II, shows that Putin is determined to settle the matter with brute force.

With the ongoing war, Ukraine has expanded its options on cryptocurrency acceptance as donations.

According to a blockchain analytic company, Elliptic, the Ukrainian government has raised $35 million through crypto-asset donations since the Russia invasion began.

In this light, Ukraine is continuously increasing the number of cryptocurrencies it will accept for donations.

In Ukraine, dogecoin and other cryptocurrencies are being accepted as donations in response to Russia invasion.

In a tweet  by Federov the Ukrainian Prime minister, he noted that people can send in dogecoin “Now memes can support our army and save lives from Russian invaders.”

Federov is involved in a project called Aid for Ukraine where

This was hopeful of the fact that the military experts expect Russia’s attacks to get more rootless and catastrophic. Everstake is a cryptocurrency blockchain platform created in collaboration with the Ukrainian government

Seemingly, Ukraine has also raised money through war bonds aside the cryptocurrency donations, the war bonds have raised over 8.14 billion Ukrainian hryvnias equivalent of $279 million.