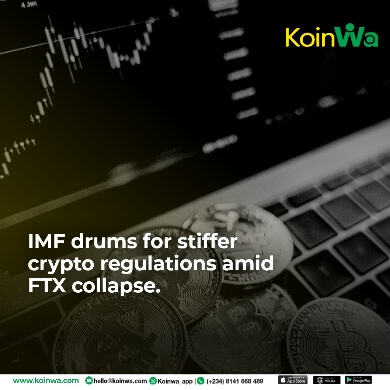 FTX collapse and the recent prosecution of its former Chie Executive Officer, Sam Bankman-Fried have continued to raise concerns in the digital industry.

Following this, the International Monetary Fund has drummed support for increased regulation of crypto markets in Africa. This was made known during its Regional Economic Outlook for sub-Saharan Africa.

According to the Monetary outfit, countries in the region should embrace regulation while referencing the collapse of FTX as well as its ripple effect in cryptocurrency prices, which has led to a renewed call for greater consumer protection and regulation of the industry.

The Fund argued that “risks from crypto assets are evident” and “it’s time to regulate” to find a balance between minimizing risk and maximizing innovation.

“The risks are much greater if crypto is adopted as a legal tender,” posing a threat to public finances if governments accept crypto as payment.

“The collapse of the World’s third largest crypto exchange FTX, and further plunge in the prices of Bitcoin, Ethereum, and other major crypto assets, is prompting renewed calls for more excellent consumer protection and regulation of the crypto industry.

“Regulating a highly volatile and decentralized system remains challenging for most governments, requiring a balance between minimizing risk and maximizing innovation. Only one-quarter of countries in Sub-Saharan Africa formally regulate crypto,” the Monetary Fund said.

According to IMF’s data, 25 percent of countries in Sub-Saharan Africa have formally regulated crypto, while two-thirds have implemented some restrictions.

However, Cameroon, Ethiopia, Lesotho, Sierra Leone, Tanzania, and the Republic of Congo have placed the crypto market under a ban, representing 20 percent of the Sub-Saharan African countries.

Kenya, Nigeria, and South Africa have the highest number of crypto adoption in the region.

Between July 2020 and June 2021, Africa’s crypto market increased in value by more than 1,200 percent, according to data from analytics firm Chainalysis, with high adoption in Kenya, South Africa, Nigeria, and Tanzania.

Subsequently, investors in the crypto industry have lost $116 billion to the bear market and the wave of bankruptcies that have engulfed the market in 2022, Forbes stated in its recent report.

However, industry observers believed the market bearish would last until the end of 2023. Among those who lost billionaire status are FTX co-founders Sam Bankman-Fried and Gary Wang, whose fortunes in March were valued at $24 billion and $5.9 billion, respectively, and at $0 in December.

The $3.2 billion fortune of Barry Silbert, founder, and CEO of Digital Currency Group, was also lost as a result of the contagious wave caused by FTX collapse, according to Forbes.