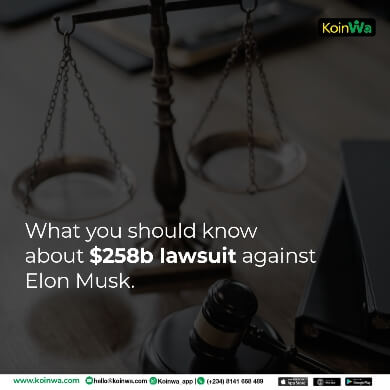 What you should know about $258b lawsuit against Elon Musk

Elon Musk a Bitcoin enthusiast as well as his companies SpaceX and Tesla Inc., are being sued for whooping $258 billion in damages for engaging in a crypto pyramid scheme allegedly involving meme coin, Dogecoin.

The damage being filed for is over 34 times the Dogecoin’s current market capitalization pegged at $7.5 billion and nearly three times its ATH market cap of $88.68 billion as at mid, 2021.

It was confirmed that the amount sought is way more than Elon Musk’s net worth by over $42 billion.

Koinwa gathered that the lawsuit was filed in the New York District Court by an attorney at Evan Spencer Law, and the suit alleges that the world’s richest man, “Used his pedestal as world’s richest man to operate and manipulate the Dogecoin pyramid scheme for profit, exposure and amusement.”

Facts behind this lawsuit

What the lawsuit claimed

The plaintiff Keith Johnson, a U.S. citizen, claimed that Musk and his corporations were “unjustly enriched” by $86 billion as a result of wire fraud, gambling enterprise, false advertising, deceptive practices, alongside other unlawful conducts.

Johnson claimed the following in the suit,

The lawsuit sought to order Elon Musk, his companies and other unlicensed professionals to desist from advertising and marketing, or promoting Dogecoin anywhere in the future.