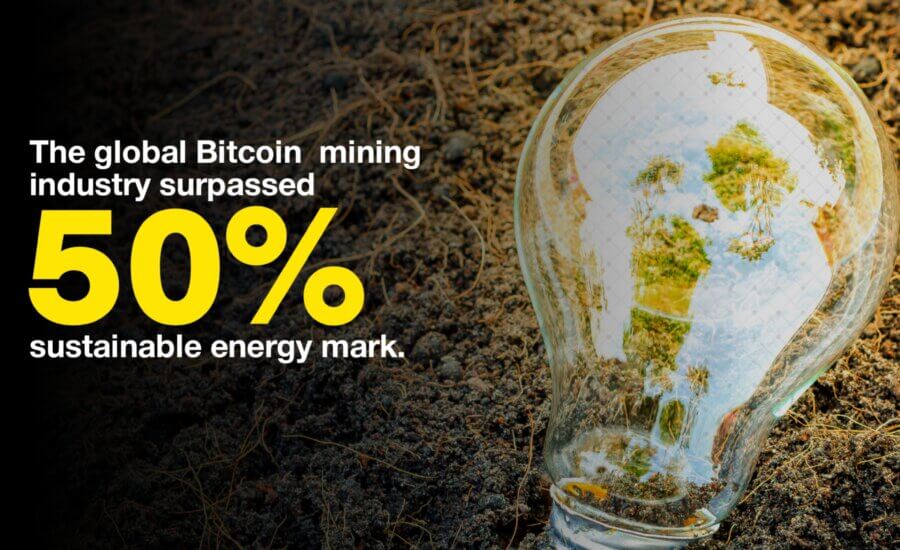 Bitcoin mining – There seems to be significant progress on the future of flagship cryptocurrency as the Bitcoin Mining Council recently announced that the estimated global Bitcoin mining industry now uses 56% sustainable energy.

Recall the CEO of Tesla, Elon Musk raised concerns over mining energy and environmental impact last month, then concluded that Tesla will commence receiving Bitcoin for payments only if mining is being done with at least 50% renewable energy.

Given this decision, the “Bitcoin Mining Company BMC” was created to oversee the administration of mining energy which is beginning to impact the environment.

Given cited challenges on the impact of mining on the immediate environment, BMC was created to provide transparent and verifiable data on renewable energy usage in the BTC mining industry.

However, in its report, BMC opines that its operation is not meant to compel or tell anyone what to do or how to go about Bitcoin mining, rather interested in the transparency of sustainable energy adopted into the flagship cryptocurrency mining.

The council has just conducted a widespread survey on the energy mix used for Bitcoin mining, infused in its survey is a 32% of the current global Bitcoin network which is strictly on energy usage information.

The survey outcome shows that members of the BMC, and participants in the recent survey are currently using electricity measured at a 67% sustainable power mix.

In line with the survey results, it was deduced that the global mining industry’s sustainable electricity mix has now improved to a record 56% for the first time, this is arguably the most sustainable industry globally as seen in the BMC Q2 2021 report.

In its ideal, the council defines sustainable electricity as “hydro, wind, solar, nuclear, geothermal and carbon-based generation with net carbon credits,” which are dependent and based on the principles from the “International Energy Agency’s Net-Zero by 2050 report.

Michael Saylor so far has been impressed with the outcome of this survey, citing the Bitcoin Mining Industry has concertedly worked jointly to put forward critical and useful information to the public and the policymakers.

In his opinion, this will help a long way to clarify common misconceptions on the nature and rate of Bitcoin energy consumption.

There are hopes that these latest findings will change a lot and create an opportunity in the Bitcoin industry. While Elon Musk may have to resume acceptance of Bitcoin for payments given his recent statement that spurs the BMC to work, Tesla’s CEO has not released an official statement in line with the outcome of this survey report.

At a time China is shutting down mining and is losing stake, control, and influence on Bitcoin there may just be a lifting point for the flagship cryptocurrency in the coming weeks.