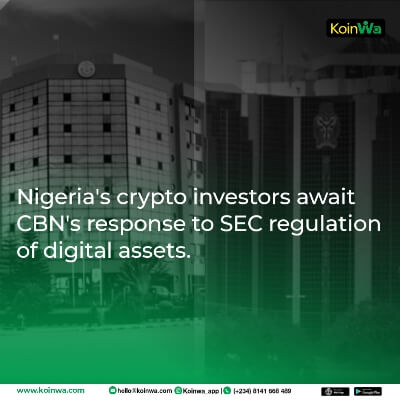 SEC regulation – In a recent development, the Security and Exchange Commission moves to regulate digital assets in Nigeria, this include the Bitcoin and other crypto assets of immense concern.

SEC looks to legalize digital assets against CBN’s initial view where they’ve been perceived more of securities than currencies.

Recall, the apex bank has in February 5th 2021 issued a ruling instructing all financial institutions to stop the facilitation of all transactions involving cryptocurrency.

It goes as far as instructing all the regulated bodies to identify individuals or organizations engaging in cryptocurrency transactions within their system and shut down their accounts with immediate effect.

On the foregoing, crypto enthusiasts are awaiting the possible response of the Central Bank of Nigeria regarding the recent move by the Security and Exchange Commission to regulate the sector.

Ideally, the SEC has given the sector a legal boost, however, the apex bank would need to concur, thereafter lift the ban, then instruct the banks to commence the facilitation of crypto transactions.

On why the CBN banned cryptocurrency in Nigeria

Despite this ban, the apex bank has continued to deny its stance to have ban the sector, however, reiterated on several fronts that it only eliminates it from the Nigeria’s financial system.

Subsequently the CBN released a document outlining the basis upon which it banned crypto assets in the country, where It claimed that digital currency is used for money laundering and terrorism financing.

The apex bank noted that the ban was in line with other countries and advice from the international community.

However, the Central Bank is yet to issue an official statement which enthusiasts think is imminent.

In this regard, unless the apex bank come to terms and concur with SEC regulation ideas, banks would still not facilitate transactions.

The cryptocurrency sector strongly believes that the apex bank will revert its existing ban in the interest of the country’s economy.

What if CBN insists on its crypto ban?

We may see a clear scenario where the Central bank may decide to maintain its ban on crypto assets despite the SEC regulation guideline.

Hence, on this premise crypto firms may exist legally with SEC’s permission, there would be a situation where they may not be able to carry out transactions with the Nigerian banks.

Noteworthy, SEC did not recognize digital assets as legal tender, however, the apex bank may have to weigh its decisions carefully towards safeguarding and promoting the financial stability of Nigeria.