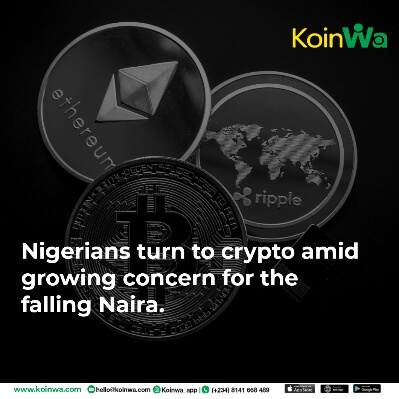 Naira has been on a free fall for the past weeks and counting, reportedly, the black market goes for as high as above N710/USD.

Not the best of times for Africa’s most populous nation’s economy, we are struck on sides by a weak and local currency, which results to;

These combined effects present a dangerous slide toward an economic meltdown. Dangerously, the naira has been on a free fall. It tumbled to a new low of N713 to USD1 last week in the unofficial market.

In this regard, many Nigerians are hedging against collapsing local currency by pursuing investments in dollar-denominated digital assets, bitcoin, and stablecoins preferably, this move has brought a plunge in the Fiat local currency to a record low in the black market.

According to recent data, Nigerians traded over $5 million worth of Bitcoin on the Paxful P2P trading website, and LocalBitcoins saw a 258% increase from its previous week’s data.

Many Nigerians exchange digital currency in the peer-to-peer market where transactions are priced in dollars, despite the standpoint that the banks are forbidden by the central bank from aiding cryptocurrency transactions.

Information received from foreign exchange dealers in various areas in Lagos revealed that Naira was exchanged for the dollar on Wednesday last week at a rate above N710 per dollar, while the dollar was purchased from holders at a rate between N695 and N700 to a dollar.

Also, escalating in the shadow market is the Central bank of Nigeria Governor, Mr. Godwin Emefiele’s recent comments at the recently concluded MPC meeting, this increased the number of Nigerians panicking and selling their Naira investments for dollars.

What you should know