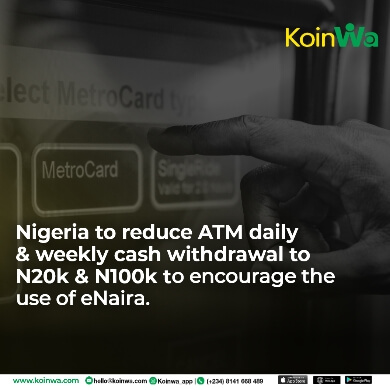 Cash withdrawal limits – Following its quest to curb the volume of cash in circulation given the newly redesigned naira as well as tone down inflation amid other concerns, the Central Bank of Nigeria has introduced revised cash withdrawal limits with effect on 9 January 2023.

Given this, the number of cash individuals and businesses can withdraw has been reduced in an attempt to push the “Cash-less Nigeria” policy and increase the use of the eNaira, the Nigerian CBDC.

The apex bank issued the directive to financial businesses in Dec. 6 circular, noting that individuals and businesses would now be limited to withdrawing N20,000 and N100 daily and weekly from the ATMs respectively.

The maximum cash withdrawal via point-of-sale terminals is also capped at N20,000 per day, announcing the changes the director of banking Supervision Haruna Mustafa noted;

The limits are cumulative limits for each withdrawal, so an individual withdrawing N20,000 from an ATM who then tries to withdraw cash from a bank on the same day would be hit with a 5% service fee.

Before the announcement, the previous limits on daily cash withdrawals were N150,000 for individuals and N500,000 for businesses.

The adoption rate for eNaira has been dramatically low since its launch on Oct. 25, 2021. The Central Bank of Nigeria has struggled to convince Nigerians to use the CBDC, with less than 0.5% of the population reported having used the eNaira as of Oct. 25, a year from its launch.

Nigeria established its cashless policy in 2012, suggesting a shift away from physical cash will stabilize and make its payment system more efficient, reduce the cost of banking services and improve the effectiveness of its monetary policy.

On Oct. 26, The CBN governor; Godwin Emefiele, noted that 85% of all naira in circulation was held outside the banks and, as a result, it would be reissuing new banknotes to drive the shift towards digital payments.