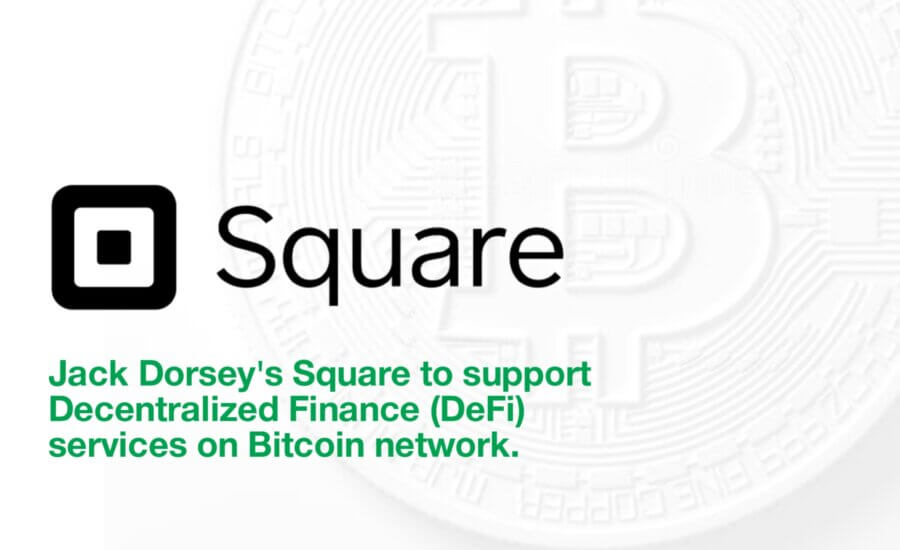 Decentralized finance – The CEO of Twitter “Jack Dorsey” and co-founder of Fintech giant “Square” has revealed that the Fintech company is building a unit focused on creating/implementing Defi services on the BTC network.

A recent report revealed that the Decentralized Finance industry has evolved to a renowned and strong industry in the cryptocurrency market valued at $110 billion from a recent $2 billion which represents a growth of 5,400% against the previous year.

The concept of DeFi

The acronym stands for “Decentralized Finance,” a way of executing financial transactions via applications. By this method, traditional financial institutions and intermediaries are being eliminated, while transactions are purely conducted on the blockchain.

The Microblog CEO “Jack Dorsey” announced on Friday via Twitter that:

“Square is creating a new business (joining seller, Cash App, and Tidal) focused on building an open developer platform with the sole goal of making it easy to create non-custodial, permissionless, and decentralized financial services. Our primary focus is #Bitcoin. Its name is TBD.”

“Like our new #Bitcoin hardware wallet, we are going to do this completely in the open. Open roadmap, open development, and open source. @brockm is leading and building this team and we have some ideas around the initial platform primitives we want to build.”

Recall, Jack Dorsey confirmed rumors initially that Square is building a bitcoin Hard wallet, said to be a mobile-friendly, “assisted-self-custody” wallet to a goal audience.

Engineer Mike Brock is said to be the head of the new division, it’s noteworthy to recall that Brock led the development that worked on integrating bitcoin features for the Cash App in 2018.

Bitcoin network is disadvantaged for not supporting smart contracts, apparently makes it difficult to compete with Ethereum-based Defi and other DeFi’s being supported by blockchain cryptocurrencies.

The concept of smart contracts

Smart contracts are programs stored on a blockchain, with the ability to run when certain favorable conditions are met. Ideally, they are used to automate the execution of an agreement which enables all participants to immediately get certain of the outcome on their own without involving any intermediary.

Despite being the biggest cryptocurrency by market Capitalization, the flagship crypto is having problems competing with Ethereum considering its inability to operate in a smart contract.

Given this, Square’s involvement with a Defi-based-bitcoin project will most certainly provide a ground for healthy competition through a fierce one between bitcoin and it is expected shortly.