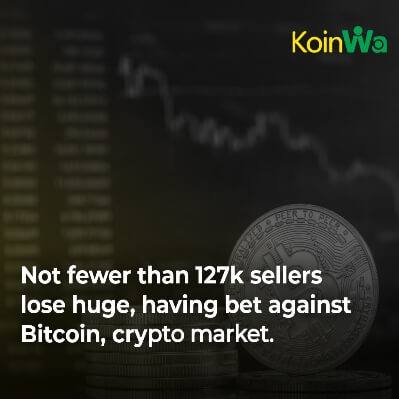 Not fewer than 127k sellers lose huge, having bet against Bitcoin, crypto market

Inflation – A strong inflation figure met a sharp reversal in the crypto assets market. Recall that BTC recently traded at $19.8k with a surge of more than 3%, it further got stuck in a tight range between $19k and $21k for the better part of previous month given worries about uncontrollable inflation and the looming possibility of a severe recession.

The market value of Ether was recently trading below $1,300, or essentially unchanged. Aave, Uniswap, XRP, were some of the day’s top gainers, each lately increased by more than 5%.

According to Labor Department data released last week, the U.S., consumer prices in September decreased from the previous month, however, the inflation rate was still on the high side, far than expected by experts.

Similarly in the week under review, BTC fell by almost 3% to its lowest level since September 21, prior this, it has fully recovered all of its losses and on its way to reclaiming the $20k milestone.

Since the Federal Reserve’s efforts to cool off skyrocketing inflation have driven down prices for financial assets viewed as risky, from equities to bitcoin, cryptocurrency traders regularly monitor monthly inflation numbers.

As the Federal and other central banks globally aggressively hike rates to combat inflation , such narrative has dampened the bullish morale around the crypto market.

Bitcoin which had a sharp decline this year, may continue to be under pressure as traders  worry about the possibility of further significant interest rate increases by the Federal Reserve at the upcoming FOMC meeting on November 1-2.

Contrary to the hype-fueled euphoria of earlier years, this has driven many investors in digital assets away from the market and from day trading, especially those who had entered the market recently.

The market lately has been devoid of retail investors, institutions have now taken center stage, which could partly account for the drop in volatility.