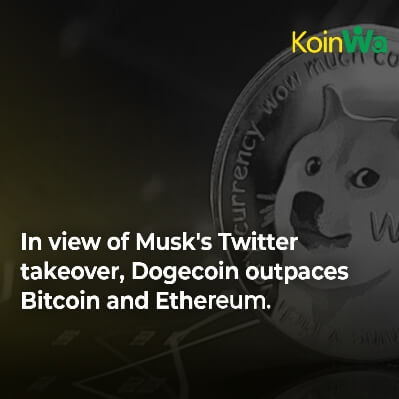 Dogecoin – Bitcoin and Ethereum despite being industry leaders took the back seat last week to other unusual rallies.

Both could have moved higher, but the U.S. Federal Reserve’s announcement on Wednesday of yet another 0.75% interest rate hike, the fourth in 2022 quickly hampered their upward trend.

Interest rate hikes are met with bearish sentiment among investors who go for riskier assets like crypto or equities. The reason is that higher rates make it harder for people to borrow money, so broadly speaking they hold onto their wealth and forgo their chancier investments.

Following the release of the Labor Department report on Friday, two market leaders recovered a little showing that the U.S. job growth was up.

The top 30 coins moved and the most impressive rally was the Polygon which ballooned 28% over the week in the wake of Reddit booming Polygon NFTs and an announcement on Wednesday by Meta that Instagram would integrate Polygon for its upcoming NFT minting features.

Dogecoin mooned 22% over seven days and topped 12 cents a far cry from its high of 73 cents in May 2021. As of last week, Dogecoin is still responding positively to the news of Twitter’s new executive manager.

It’s been a week since Elon Musk took over Twitter and the news since has offered strong hints that the world’s biggest microblogging platform may pivot towards Web3 and crypto sooner than expected.

For a start, on Monday, Binance CEO Changpeng “CZ” Zhao appeared on CNBC and said his exchange had invested half a billion dollars in Musk’s takeover to give crypto a seat at the table when it comes to free speech.

CZ also talked about the potential crypto use cases on Twitter, saying that Musk’s tentative plans to charge a subscription fee for verified accounts could be done very easily, globally, using cryptocurrencies as a means of payment.

Binance has announced last week that it’s creating an internal blockchain team to assist the Tesla CEO in his crackdown on bot accounts.

The steady mainstream adoption of crypto continued this week when on Monday the industry cheered two important announcements.

Hong Kong’s Securities and Futures Commission says it is now ready to conduct public consultation on how to give retail investors access to crypto.

Although crypto exchanges are allowed to operate in the special administrative region, onboarding is restricted to investors with at least HK$8 million ($1 million) in their portfolios.

The regulator said it is open to reviewing property rights for tokenized assets and the legality of smart contracts at some point and it is exploring several pilot projects to test the potential benefits of using crypto.