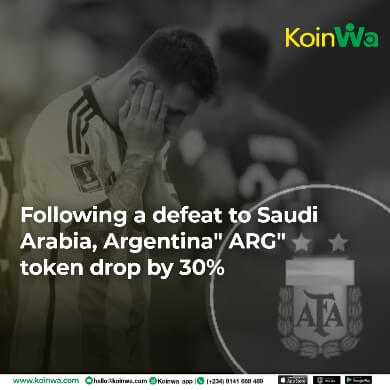 Argentina – The FIFA 2022 World Cup In Qatar has caused a setback to the value of Argentina’s national football team fan token.

Argentine Football Association’s crypto fan token ARG fell from about $7.20 at the start of the game to a low of $4.96.

The defeat was severe that several supporters opted to sell their tokens, which were produced by the crypto firm Chiliz in official collaboration with the Argentine Football Association and launched on Chiliz’s exchange Socio.

After a shocking 2-1 loss for Argentina’s national team, the $ARG token nosedived more than 30% to $4.96 on Tuesday evening, according to CoinGecko.

The token gives buyers a vote in some decisions made by sponsoring teams and access to rewards. For the unlimited, ARG is a particular kind of Ethereum-compatible ERC-20 token that requires fans to first purchase Chiliz’s CHZ token, which is down 17% over the last week before they can swap it for any other token on Socios.

The fan token can be purchased on several popular exchanges like OKX, Huobi, and DigiFinex.

Over the past year, a significant number of the world’s largest clubs, such as FC., Barcelona, Paris Saint Germaine F.C., and Manchester City F.C., as well as some national teams, have partnered with Socios.com and Bitci to create fan tokens.

The tokens have quickly become a new source of revenue for teams.

The tokens, although they don’t represent the ownership in teams, are a way for investors to be on the success of their favorite team.

The value of these fan tokens can fluctuate greatly and fans can lose money, as the wider crypto market faces the fallout of crypto exchange FTX’s financial collapse earlier this month.