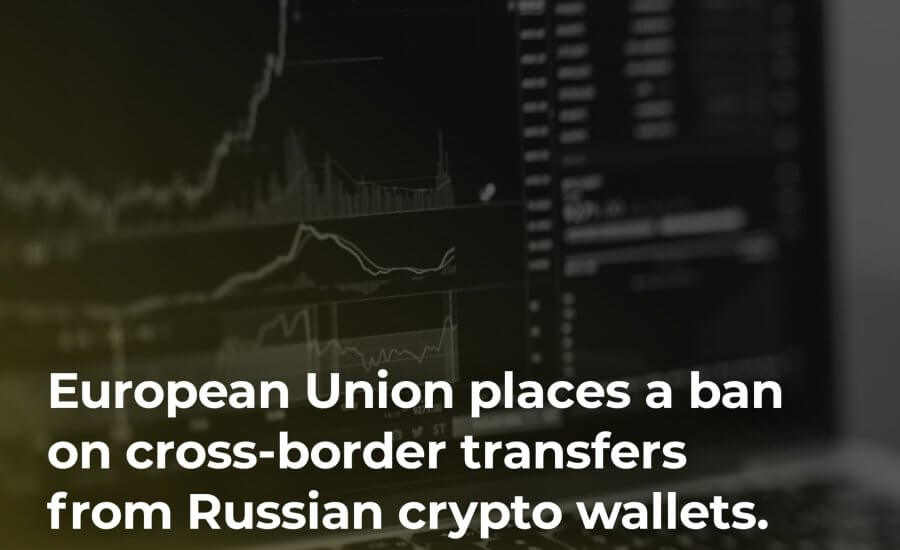 European Union – Following the invasion of Ukraine by Russia which has developed into a fledge war between the two countries, Russia has come under several sanctions aimed to down its economy by implication consequently.
The latest of these measures by the European Union is a ban on transfers from Russian cryptocurrency wallets.

It was observed that having cut off the country through the centralized financial system, she adopts the crypto assets as means of exchange through which trade and balances were possible between countries who patronize her.

The European Union announced a new sanction on Russia on October 6 in response to the protracted and recently intensified conflict with its neighbor country Ukraine.

The new measures include a prohibition on cross-border crypto transfers between the EU and Russia. The phrase “All crypto asset wallets, accounts, or custody services, irrespective of the amount of the wallet” is included in the prohibition.

In response to Russia’s acquisition of Ukraine’s land as a result of what the EU considers a “Fake” vote, more sanctions were put in place along with the force mobilization and nuclear escalation threats.

The previous restrictions set a $10,000 limit on cryptocurrency transfers from Russian to EU wallets.

However, the EU’s goal to further deny the Kremlin’s military and industrial complex of crucial components and technologies is in line with the new overall prohibition on cross-border cryptocurrency transfersbetween regions.

This becomes a regular occurrence after Russian government officials approved the use of cryptocurrencies for international payments.

The legislation that authorized these transactions included instructions on how to obtain crypto assets and a list of their applications.

The choice was in line with the Central Bank of Russia’sdecision, made on September 5 of last year, to legitimize digital assets for international payments.

Russia in its dealings with China intends to establish a digital currency for transaction settlements, which is now in a pilot phase.

Before 2020, the nation passed a law outlawing payments made using digital assets. However, as the EU’s sanctions continued to be tightened, the U.S. imposed more barriers against Russia.

Due to Neo-Nazi paramilitary activity, the U.S. Treasury Department placed 22 Russian citizens and two entities with headquarters there on its list of sanctioned parties on September 15.

Can Russia survive this onslaught? That’s left to be seen.