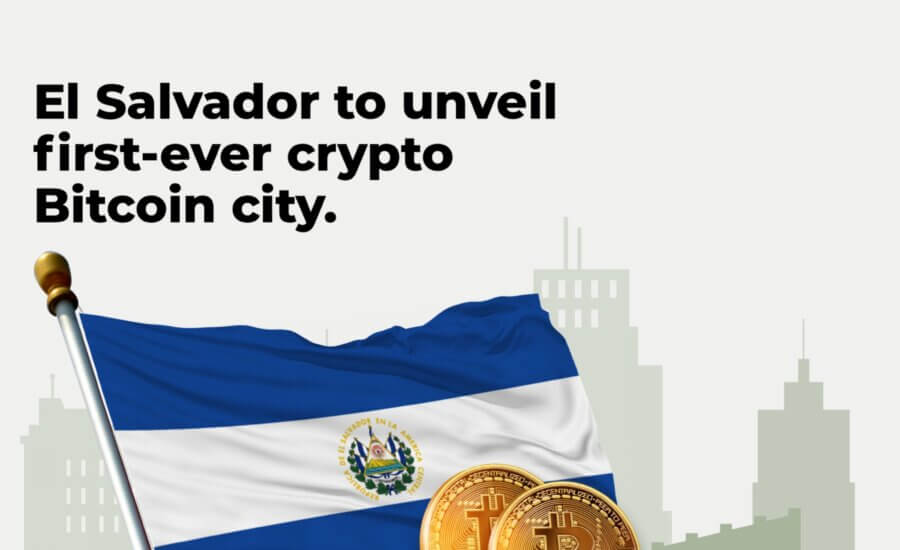 Bitcoin city – To further demonstrate great courage and leadership worth emulating towards advancing the financial capacity of El Salvador, its President, Nayib Bukele has made a presentation at the Bitcoin week that the country plans to build its entire city based on dollar cryptocurrency assets, where it will be tagged “Bitcoin city.”

The new city will be located along Gulf of Fonesca, close to a volcano, according to the President.

The government is likewise looking to locate a power plant to provide energy for both the city and Bitcoin mining.

“In Bitcoin city we will have digital and technological education. Geothermal energy for the entire city and efficient sustainable public transport.”

“The Bitcoin city will be a full-fledged metropolis with residential and commercial areas, restaurants, and airport, where a port and rail service will be made available too.”

He noted that the city will take a coin shape, where a plaza will be located at the city centre unmasking a huge BTC symbol.

“The city will have no income, property, capital gain or payroll taxes.”

El Salvador plans to use a $1 billion bitcoin bond, which will be a tokenized financial instrument that will be developed by Blockstream on the liquid network.

However, a press release by Blockstream said thus,

“The $1 billion US raised will be split between a $500M allocation of Bitcoin and a $500M infrastructure spend for building out energy and Bitcoin mining infrastructure in the region.”

“The Bitcoin bond will have special dividends dispersed on an annual basis generated by the staggered liquidation of Bitcoin. Using Blockstream’s Asset Management Platform, dividends are easily paid out to bondholders.”

However, Bitfinex, CTO, Paolo Ardoino, stated that the exchange will support El Sakvador’s Bitcoin City initiative by launching a security platform to hold the Bitcoin bonds.

“The platform will soon be home to many local and foreign digital assets offering developing new digital asset regulation for the country, El Salvador, Bitfinex and Blockstream are making history together.”

The Blockstream chief security officer, Samson Mao also stated that the Bitcoin bonds will be subject to five-year lock-up period, effectively taking the invested capital out of global circulation.

He also noted how a ten-fold increase in similar initiative from the other countries will eventually take half of Bitcoin’s 21 million market Capitalization out of the very significant and impact circulation.

El Salvador is setting the pace, countries should emulate President Nayib Bukele in accepting and advancing the Bitcoin project which has proved effective in providing answers to so many deficiencies, unemployment and economic prosperity.