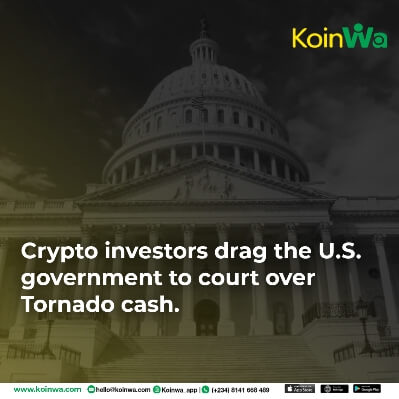 Tornado cash – Several Tornado cash customers have sued the U.S. government over Treasury Department’s choice to add cryptocurrency mixer to the list of the SDNs and Blocked Persons.

They submitted a grievance to the U.S. Plaintiff in the Western District of Texas District Court which states that Tornado Cash’s punishment violates their innate rights and harms their capacity to conduct free and private financial transactions.

Because of the August 8 categorization, no Ethereum users located in the US are permitted to use the Tornado cash privacy protocol without risking severe repercussions from government enforcement.

Plaintiffs and other law-abiding persons are not permitted to send or receive money through Tornado cash.

The action, however, names the director of the Office for Foreign Assets Control, Andrea Gacki, and Treasury Secretary Janet Yellen as defendants.

In a letter to Yellen written last month, Congressman Tom Emmer of Minnesota questioned the legality of punishing Tornado Cash, which is not a person, piece of property, or other legal entity.

Bitcoin exchange, Coinbase claims to have sponsored the legal action to contest and overturn the penalty.

“As one of the biggest organizations in the cryptocurrency space, we have a duty to defend the sector from acts that go too far and treat it unfairly.

Simply stating that we disagree and remaining neutral is insufficient. We are funding and supporting this lawsuit because of this” it stated.

Paul Grewal, chief legal officer at Coinbase, claims that the prohibition of Tornado cash has consequences for everyone.

This legal challenge is being made because OFAC sanctioned open-source software prevented US citizens from using it, but they have also discouraged cryptographers and developers from working on other crucial privacy projects for fear that their code would also be sanctioned in the future.

What is Tornado Cash?

Tornado Cash is a decentralized non-custodial privacy solution built on the Ethereum blockchain-based zero-knowledge proofs. It enables users to break links in on-chain transactions and enhance transaction privacy between deposit and withdrawal addresses.

Tornado Cash acts as a coin mixer. It leverages smart contracts to facilitate ETH deposits and multiple address withdrawals. Withdrawals are made from the Tornado protocol liquidity pools, making it difficult to know the sender’s identity.

Tornado creates a secret hash when a user deposits crypto. Its protocol admits the deposits and the hash in a process known as commitment. The commitment identifies the owner of the funds and confirms them during withdrawal. When withdrawing the funds, the user must input the secret hash to prove ownership while maintaining on-chain anonymity.

Tornado Cash is community-based – in May 2020, the Tornado developers surrendered the management of the protocol’s multi-signature wallet via a contract update referred to as Trusted Setup Ceremony. Therefore, the founders lost control of Tornado, making it a completely decentralized protocol.

TORN is the native currency of Tornado Cash. It’s an ERC-20 token with a maximum supply of 10 billion coins, and it enables holders to participate in proposals and vote for protocol changes. Besides, TORN holders gain Anonymity Points as they use the protocol, which they can deposit into a protected account and convert into TORN tokens.