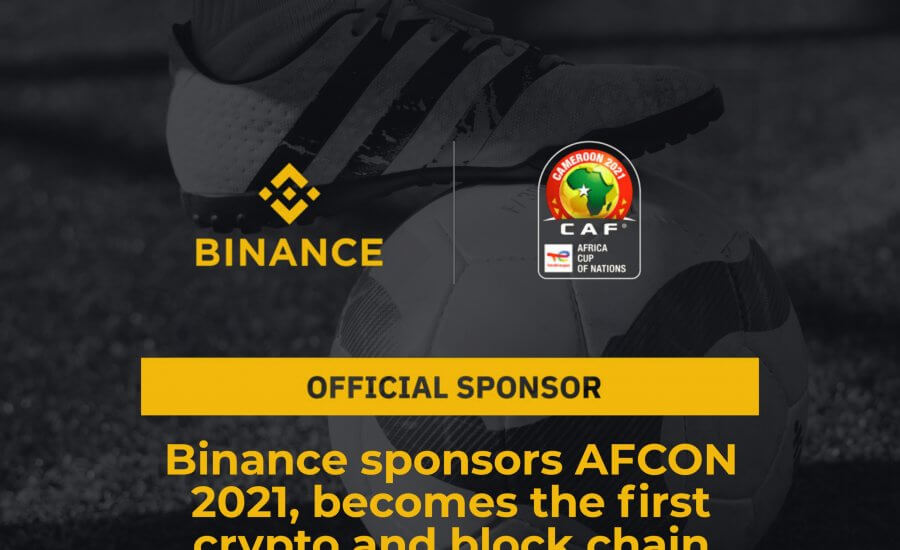 AFCON – Football has undoubtedly proved to be the most unifying sports in Nigeria, Africa and the world at large. It has been an antidote that erases ethnic, religious and political lines in Nigeria.

African Cup of Nations in brief (AFCON) is a bi-annual and by far the largest men’s football tournament in Africa. The 2021 edition was, however, moved to February 2022 following the outbreak of Covid-19.

Being held in Cameroon, Binance, a cryptocurrency blockchain announced its partnership with the Confederation of African football (CAF), as well as its official sponsorship for the AFCON 2021.

In this development, Binance becomes the first crypto and blockchain sponsor of the Africa’s most prestigious tournament.

Alongside this sponsorship, it’s expected that Binance will be promoting CAF’s social media content, which include,

The tournament is designed to cover games from five cities in Cameroon across all six venues.

The general CAF secretary, Veron Mosengo-Omba was, however, delighted to welcome Binance now the official sponsor of the AFCON 2021 tournament being played in 2022 across five cities in Cameroon.

In Mosengo-Omba’s remark he said “I am optimistic that this partnership will push the African football to a new level.” The tournament commence on January 10, it’s expected to run through February 6.

What you should know about this partnership

The crypto blockchain’s partnership with CAF is part of necessary and routing campaign to improve financial inclusion in Africa where it was believed that majority have very limited access to banks and other financial services/institutions.

It has been confirmed that through its effort, Binance has given over 541,000 Africans access to free classes on crypto education.

Responding to this partnership and its benefits, Binance’s director for Africa, Emmanuel Babalola asserted that football is the most popular sport in Africa and Binance hopes that this sponsorship will

Further equalize a mission to move crypto mainstream adoption to the next stage in Africa.