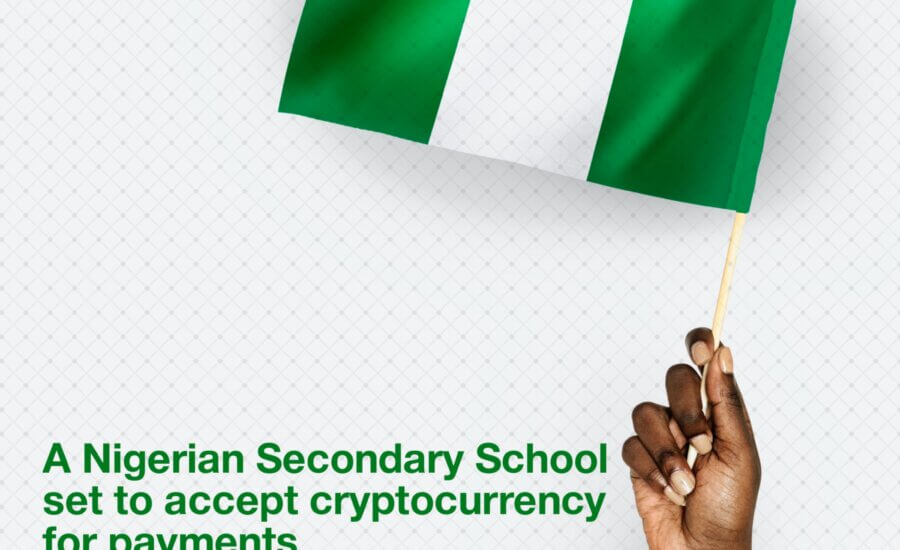 A Nigerian secondary school set to accept cryptocurrency for payment

Nigerian secondary school in Kano state, new Oxford Academy has resolved to accept cryptocurrency as a means of payment for its fees and other necessary collections it has accepted in the Nigerian naira in the past.

This was gathered from a report published by Kano Focus, a popular news publishing media in the ancient city of Kano.

While addressing newsmen in Kano, the proprietor Mr. Sabi’u Haruna hints that students will be allowed to pay their tuition fees in cryptocurrency going forward.

It was revealed that parents were much aware of this decision having been informed earlier in a joint meeting organized between parents and the said Nigerian secondary school management.

This decision was adopted despite the Central Bank of Nigeria’s ban on cryptocurrency trading and related transactions in the country way back in February 2021.

According to the Proprietor, Mr. Haruna “We have decided to accept cryptocurrency as school fees, because the world today is tilting towards the system. We believe one day, digital money will gain more acceptance than traditional paper money.”

He further stressed that the decision was to ease the stress parents underwent in the past trying to pay their children’s and ward’s school fees.

Mr. Haruna cited that countries like El Salvador and Tanzania have included and expanded the choice of payment options with cryptocurrency for users who feel safe and are accustomed to its dynamics, thus a piece of sensational news from the Nigerian secondary school authority to the parents

The Central Bank of Nigeria in February banned trading and any form of related transactions with cryptocurrency through the country’s financial institutions.

In its circular, it mandated the banks to cease further transactions, shut down, and report any account being used for this purpose.

Subsequently, this single unhealthy economic decision as Nigerians perceived did not go down without being engaged in series of battles of words and concerns, anger and expressions that rather suggest the apex bank missed the goal post and bombed the wrong casino instead.

Analysts, different government agencies, lawmakers, and the Nigerian Vice President lend their voices to further support the masses against the decision to suspend cryptocurrency trading and related transactions.

The apex bank however made its position clear not to have banned crypto, rather directed that the financial institutions must stop all forms of transactions.

For its reasons, the apex bank cited the proliferation of Money Laundering and Terrorism Financing among other related crimes being propagated under the guise of the trading digital asset.

How CBN is managing the situation

Given this development and a need to get Nigerians back on track, the Central Bank of Nigeria has promised to introduce its version of the digital currency known as (CBGC), according to the apex bank, the digital currency will come to life in Nigeria as stated by the bank’s Director of the/!+Information Technology Department, in the person of Mrs. Rakiyat Mohammed.