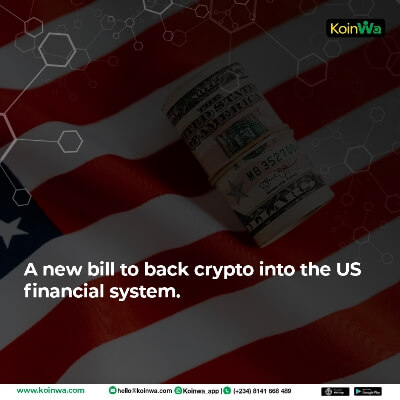 Bill – Following the need for an equalized financial ecosystem, the US renown senator Cynthia Lummis has introduced a bill  to grant digital assets a place in the US financial system.

According to a report, this should be the first of its kind designed to adopt digital assets in the most prestigious nation’s financial system.

The senator in a tweet recently confirmed the idea of this bill is at its final stage,

“We have been testing it for months, but the time is almost here; a proposal to fully integrate digital assets into our financial system. Excited to finally unveil this effort next week, stay tuned.

Significantly senator Cynthia had this idea supported by her colleague “Senator Kirsten Gillibrand,” a New York Democrat who joined this project in March, 2022 to co-author the bill.

A collaboration seen by many in the crypto industry as a non-partisan move towards crypto regulation.

The two senators Cynthia Lummis and Kristin Gillibrand finally unveiled their draft during a sitting on Tuesday June 7, 2022.

The proposed bill – dubbed the Responsible Financial Innovation Act – looks to create clarity for regulators and the crypto industry to safeguard investors and consumers.

Under the proposal released Tuesday, crypto exchanges and product offerings will have to disclose risks of losses, how assets are treated in the event of bankruptcy, while consumers are guaranteed the right to keep and control digital assets they own.

There was an attempt to settle the score between the Securities and Exchange Commission and the Commodities Futures Trading Commission to define which agency has jurisdiction over what.

What the Digital Chamber says

The Digital chamber applauds the co-Senators for introducing the long awaited Responsible Financial Innovation Act through its Chief Executive officer of the chamber “Perianne Boring.” Thus:👇 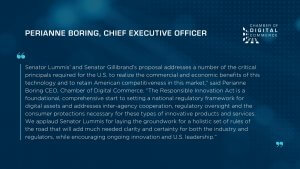 What the Bill seek to achieve

The bill points that institutionalizing of a self-regulatory body to be in charge of cryptocurrencies  and other digital assets is the way to go.

The draft recommends that the “Commodity Futures Trading Commission (CFTC)” act as the crypto market regulator.

There could be a possible conflict between the Commission and the Security and Exchange Commission (SEC), given the later under Gary Gensler, has actively involved itself in strict policing of the crypto market.

A call for crypto regulation

Regulators have recently called for the regulations of the crypto space, accompanied by a study launched by the White House into crypto space. Not specific with the US alone, other regulatory agencies worldwide have seen the need and are calling for more dynamic changes to accommodate the priced asset.